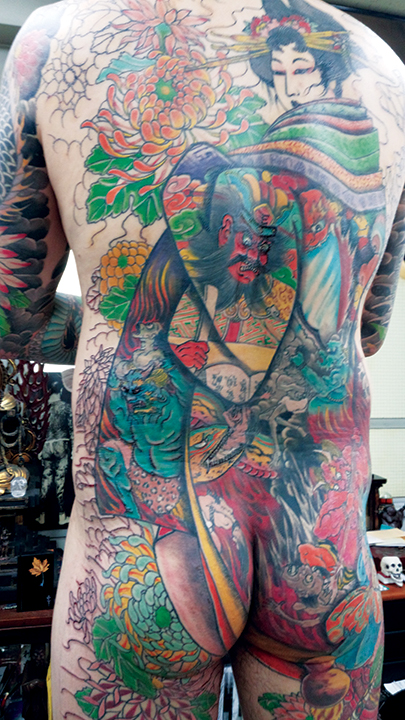 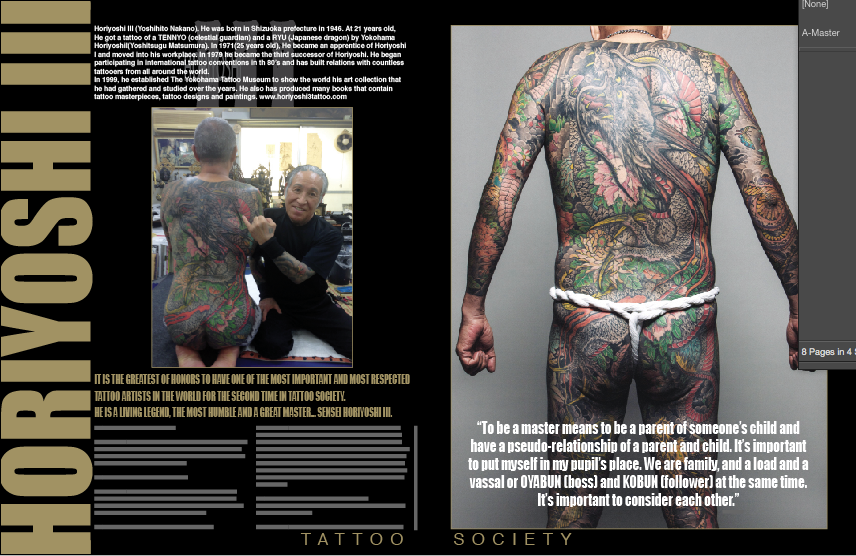 TS: What do tattoos mean to you?

Horiyoshi III: It’s my job but life training as well. I look at myself, try to develop myself and derive my philosophy of life from my works. In addition for me, tattoos equal Horiyoshi and Horiyoshi equals me and it circulates for eternity.

TS: How long have you been tattooing?

Horiyoshi III: I started tattooing at 20 years old through self-study, and at 23, I made an electric tattoo machine using an electric razor. But I really wanted to get trained in earnest and I asked HoriyoshiⅠto be his pupil at 25 years old.

TS: How did your family start Japanese tattooing?

Horiyoshi III: Horiyoshi Ⅰ, was born in Koufu-city, Yamanashi prefecture and he had developed tattooing technique through self-study. At that time, all tattooers used a double row of needles but he improved on this technique by three rows of needles. He is also a pioneer of the tint gradation technique called MIZU BOKASHI (before him, tattooers made gradation by USUZUMI BOKASHI). Therefore his nickname is “BOKASHI NO Horiyoshi (master of gradation, Horiyoshi)”. He had some pupils but only I’m left now.

TS: Your son Souryou, will he become the next Horyoshi IV? If so how would it happen? And Is there a system to become that master?

Horiyoshi III: I don’t think about the Ⅳ seriously now. It’s ideal that my son, Souryou will succeed the Ⅳ but the requirements will be very hard. The successor inherits not only the name but also a huge responsibility that leaving the name of Horiyoshi to posterity. He needs to be prepared to rave himself to death in the tattoo life. 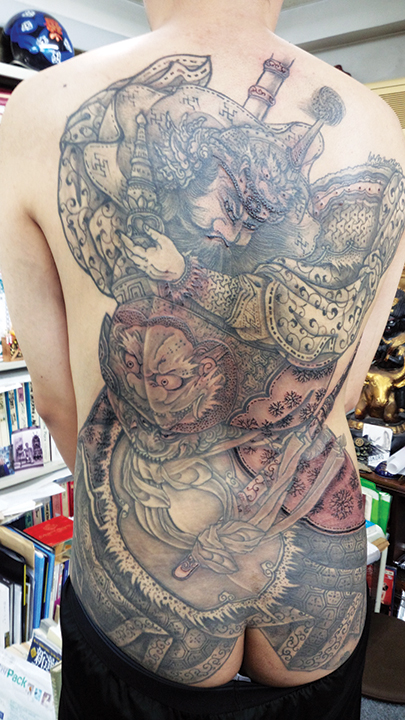 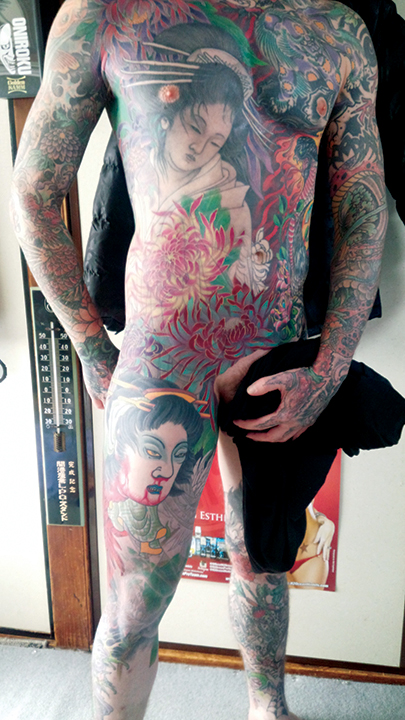 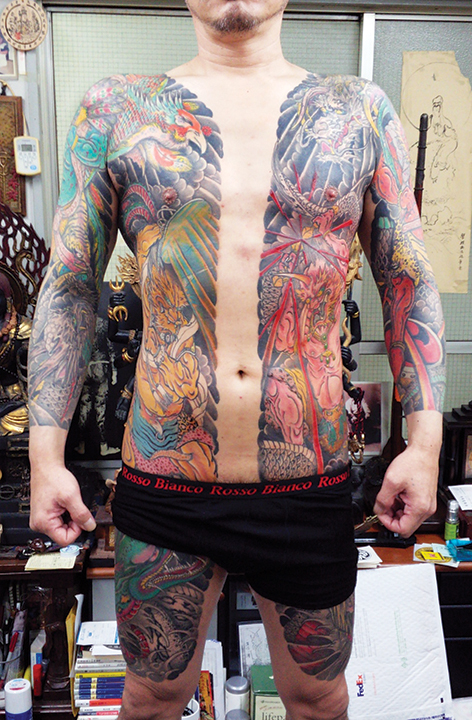 TS: Who were your early influences in the tattoo world?

TS: Did you apprentice under someone? How long was it?

Horiyoshi III: I became a pupil of Horiyoshi Ⅰ and moved into the first floor of his studio when I was 25 years old (in 1971). I feel I’m still his pupil and my training as his pupil continues until my death. As I mentioned before, the relationship between a master and pupil is the same as a parent and child. So I think we should take over the teaching of our parents until we die and this spirit shows filial piety to our parents (masters).

TS: Do you think a traditional apprenticeship is the best way to learn how to tattoo?

TS: What would be the most important lesson to give an apprentice of your?

Horiyoshi III: The most import thing is morality and loyalty as human. Then they acquire knowledge by constantly learning from themselves, the knowledge produces wisdom and the wisdom produces improvements of skills or imaginations. I think it’s important to keep on with life training and self-disciplined as well. We have the expression “Let go all that you have done for others, and engrave all that others have done for you on the stele.” We should keep this spirit.

Horiyoshi III: It was very hard to obtain not only tools but also any information about tattoo. Especially needles, SUMI (black ink) and colors were big secrets even between major tattoers. Troubles often occurred when tattooers used other’s sketches without permission like today. We had only six or seven colors and the main was SHU (orangeish red and yellowish red). Clients got a high fever after tattooing with SHU and some physical constitution predisposed them to have keloids. We still have to improve colors but at that time, they were drastically discolored time went by. Green became dull color, yellow became light brown and blue became bluish black, and we couldn’t expect to keep bright colors. In addition, it was often happened that tattooed place felt itchy after few years.

TS: Tell us about tattoos in Japan. Is it easy now or harder to work? How do Japanese people look at tattoos, are they getting acceptable these days or do people still relates the art with crime?

More of this interview inside Tattoo Society Magazine back issue #43 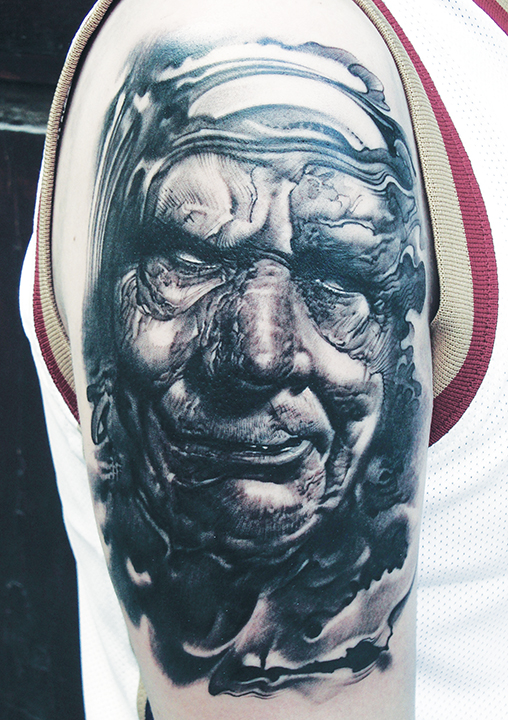 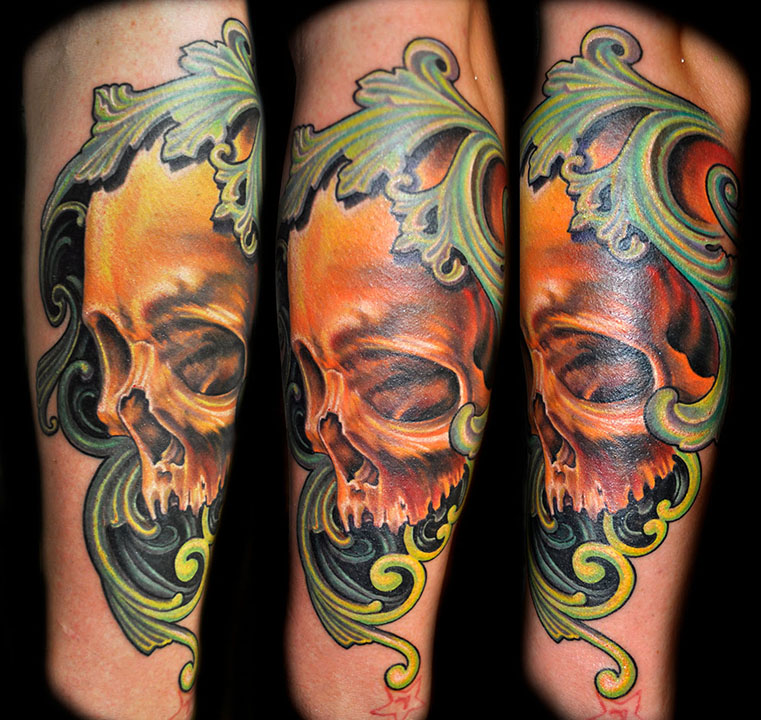 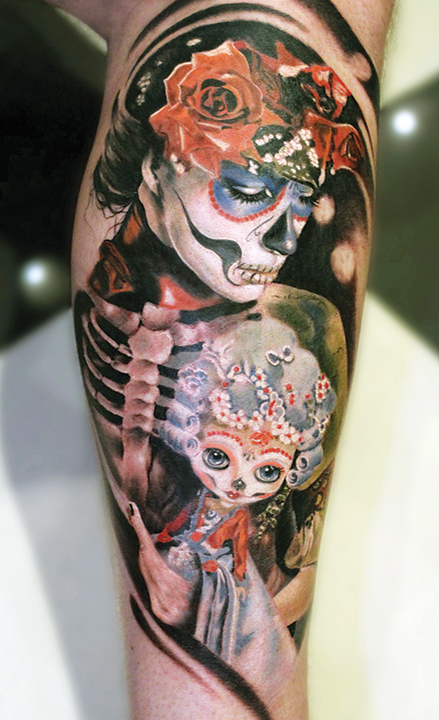